In this next segment of Building on web3, Edge & Node developer relations engineer Nader Dabit expands upon the web3 stack and how developers can conceptualize the various facets of building on web3.

I transitioned into web3 in April 2021 after being a traditional full-stack developer for around 10 years. While diving into all of these new technologies and ideas, the first thing I wanted to know was “what is the web3 stack?”.

When building a traditional web or mobile application, I often depend on a handful of building blocks to get the job done.

Using these core components, I can build out most of the types of applications I would like to, or at least get most of the way there. So what did this look like in web3?

It turns out, the answer to this is not so straightforward because:

It was also harder for me to understand how to get up and running with, and build out, web3 applications because I was approaching the problems in the same way that I was in the web2 world.

After working, researching, experimenting, and building things over the past 8 months or so I’d like to share what I’ve learned.

Before we define the web3 stack, let’s attempt to define web3. There are countless definitions depending on who you ask, but to me I find this definition spot on:

Web3 is the stack of protocols that enable fully decentralized applications.

Some of the characteristics enabled by web3 are:

While some of the applications built on decentralized tech stacks will replace their predecessors, a new paradigm of apps have also been made possible by the new primitives enabled by blockchains.

Native digital payments and public back end infrastructure – like machine learning, mobile devices, virtual reality, and other technological primitives, platforms, and building blocks – enable entirely new types of applications to be built, some that have yet to be imagined.

Does this mean that everything is going to be replaced by web3? Not necessarily. While I do think that building on a decentralized tech stack is a much better choice for certain types of applications – like almost any technical decision, it depends on what you are building.

Let’s now start diving into the web3 stack, broken into this set of categories: 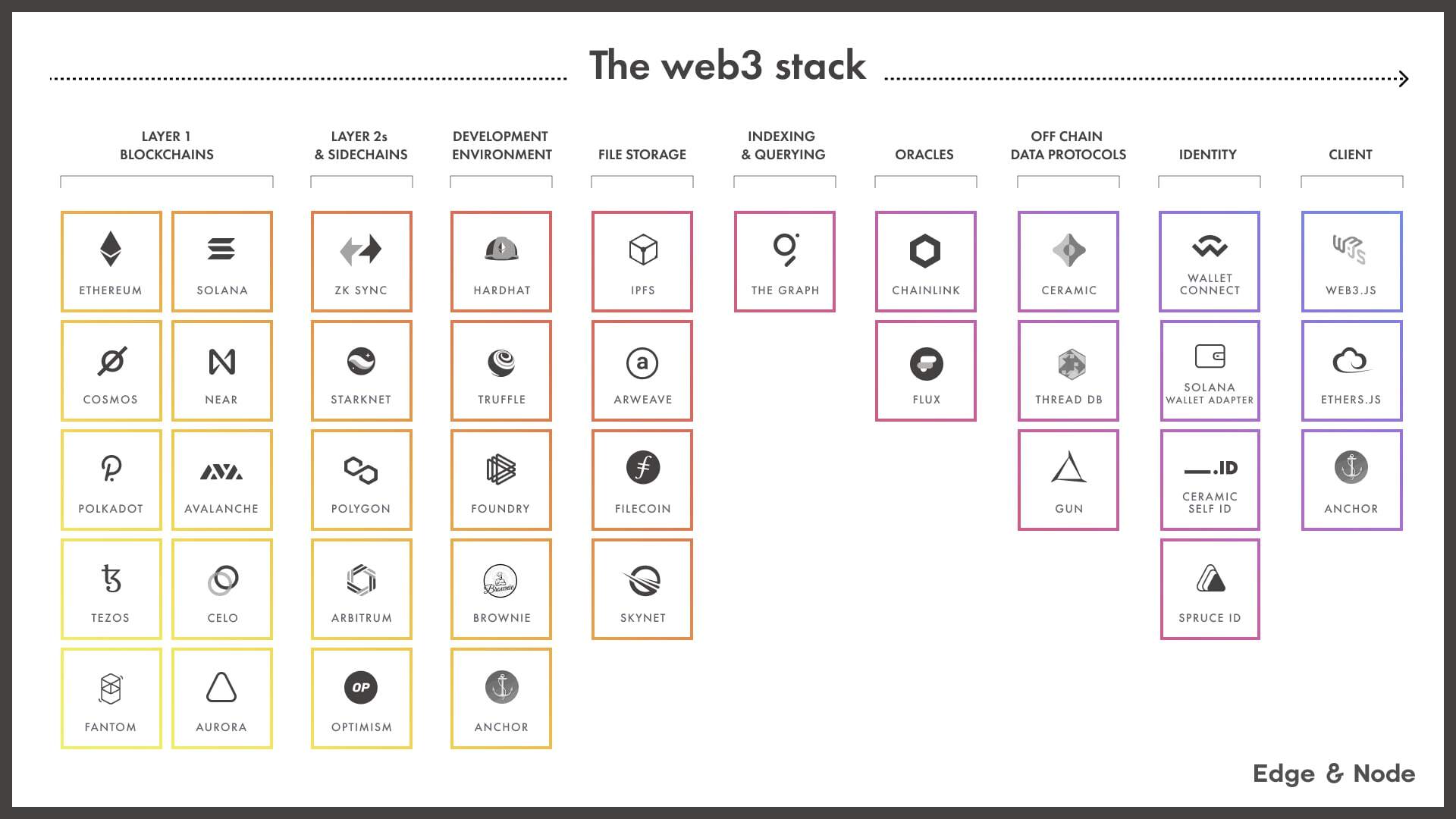 There are countless blockchains that you can choose to build on. There is no single one that is "the best", instead you should consider the various tradeoffs between them.

In the Blockchain world, learning Solidity and the EVM (or Ethereum Virtual Machine) might be the best bet when getting started as a blockchain developer. Using this skillset (and tech stack), you can build not only for Ethereum, but other Ethereum Layer 2s, sidechains, and even other blockchains like Avalanche, Fantom, and Celo.

That being said, Rust is beginning to become more and more popular in the blockchain world, with Solana, NEAR, Polkadot, and others having first class Rust support. You probably can’t really go wrong learning either, but for the beginner I’d say that Solidity will still be the better choice if someone asked me today.

Beyond that advice, here is an incomplete sample of blockchains that have a solid combination of technology, utility, community, momentum, and future viability:

When interacting with a network, you'll need to use an RPC endpoint.

There are a few ways you can do this:

Public RPC endpoints are often provided by the network, but for most production dapps you'll want to leverage your own endpoints as they are not stable or recommended for production.

There are a handful of RPC service providers out there, here are a few:

There is also a web3 / decentralized solution, Pocket Network that seems to be gaining traction.

Any of these options are probably a good bet for interacting directly with your network.

For EVM development, there are a few good development environments available:

For Solana development, Anchor is quickly becoming the entry-point for new developers. It provides a CLI for scaffolding out, building, and testing Solana programs as well as client libraries that you can use for building out front ends. It also includes a DSL that abstracts away a lot of the complexities that developers often run into when they get started with Solana and Rust development.

Where do we store images, videos, and other files in web3? Storing anything that large on-chain is usually prohibitively expensive, so we probably don’t want to store them there.

Instead, we can use one of a handful of file storage protocols:

In addition to file storage and on-chain storage, you may also need to store data off-chain. You might use these types of solutions similarly to how you might use a database in a traditional tech stack, but instead they are replicated across n number of nodes on a decentralized network, and therefore more reliable (at least in theory).

A few options are:

In terms of maturity, my take is that the ecosystem of off-chain storage solutions is not yet where it needs to be to build out some of the more advanced use cases some developers might want. Some challenges here are real-time data, conflict detection and conflict resolution, write authorization, documentation, and general developer experience.

Integrating offchain data solutions with blockchain protocols is one of the last big hurdles we need to cross before we have a fully decentralized protocol stack capable of supporting any kind of application.

There are a lot of differences in the way that we interact with and build on top of blockchains versus databases in the traditional tech stack. With blockchains, data isn’t stored in a format that can efficiently or easily be consumed directly from other applications or front ends.

Blockchains are optimized for write operations. You often hear the innovation happening centered around transactions per second, block time, and transaction cost. Blockchain data is written in blocks over the course of time, making anything other than basic read operations impossible.

In most applications, you need features like relational data, sorting, filtering, full text search, pagination and many other types of querying capabilities. In order to do this, data needs to be indexed and organized for efficient retrieval.

Traditionally, that’s the work that databases do in the centralized tech stack, but that indexing layer was missing in the web3 stack.

The Graph is a protocol for indexing and querying blockchain data that makes this process much easier and offers a decentralized solution for doing so. Anyone can build and publish open GraphQL APIs, called subgraphs, making blockchain data easy to query.

To learn more about The Graph, check out the docs here or my tutorial here.

Identity is a completely different paradigm in web3. In web2, authentication is almost always based on a user’s personal information. This information is usually gathered either via a form or an OAuth provider that asks the user to hand over in exchange for access to the application.

In web3, identity revolves completely around the idea of wallets and public key cryptography.

While the name “wallet” serves its purpose, I’ve found that people new to web3 find the terminology confusing as it relates to authentication and identity. I hope that in the future we can figure out some other way to convey what a wallet is, as it combines aspects of finance but also identity and reputation.

As a developer, you will need to understand how to access and interact with the user’s wallet and address in various ways.

At a very basic level (and a very common requirement), you might want to request access to the user’s wallet. To do this, you’ll usually be able to access the user’s wallet in the window context (web browser) or using something like WalletConnect or Solana’s Wallet Adapter.

For instance, if they have an Ethereum wallet available, you’ll be able to access window.ethereum. The same for Solana (window.solana), Arweave (window.arweaveWallet), and a handful of others. WalletConnect is good for mobile web and React Native as it allows users to authorize using their mobile wallets directly from the device.

What about managing user profiles in a decentralized way? Ceramic Network offers the most robust protocol and suite of tools for managing decentralized identity. They recently released a blog post outlining some of their most recent updates and giving some guidelines around how all of the tools work together. I’d start there and then explore their docs to gain an understanding of how to start building, and consider checking out my example project here that uses Ceramic self.id.

If you want to fetch a user’s ENS text records, the ensjs library offers a nice API for fetching user data:

SpruceID is also something that looks promising but I’ve yet to try it out.

Ceramic and Spruce both implement the W3C DID specificiation, which itself is also something that I would consider as a building block of web3. With that being said, any centralized implementation of DIDs goes against the idea of what the specification is trying to accomplish.

As far as JavaScript frameworks go, you can really build with anything you’d like, as the client-side blockchain SDKs are mostly framework-agnostic. That being said, an overwhelming number of projects and examples are built in React. There are also a handful of libraries like Solana Wallet Adapter that offer additional utilities for React, so I’d say that learning or being familiar with React is going to probably be a smart move.

For client-side SDKs in Ethereum there’s web3.js and ethers.js. To me Ethers is more approachable and has better documentation, though web3.js has been around longer.

In Solana, you’ll probably be working with @solana/web3.js and / or Anchor. I’ve found Anchor client libraries to be my go-to for building Solana programs since I’m using Anchor framework anyway, and I’ve found it much easier to understand then @solana/web3.js.

For example, the majority of financial applications require knowledge of real-world data & events happening off-chain, so Oracles are especially important in DeFi.

Chainlink is an Oracle that enables access to real-world data and off-chain computation while maintaining the security and reliability guarantees inherent to blockchain technology.

Flux is a cross-chain oracle that provides smart contracts with access to economically secure data feeds.

Livepeer is a decentralized video streaming network. It is mature and widely used with over 70,000 GPUs live on the network.

This post will be a living document that I keep up with as I learn, experiment, and gather feedback from developers building in web3.

If you have any feedback or ideas around something I’m missing here, please reach and share your thoughts with me. It’s exciting to see all the activity happening around web3 as developers are jumping in and getting involved. While the infrastructure is still evolving, the vision of building truly decentralized protocols and applications that allow people to coordinate without having to give power and control to large companies is an important one and we’re close to making this vision a reality.

Subscribe to our newsletter for the best of web3

Stay on top of the latest web3 news with a fresh cup of web3 Tea delivered right to your inbox. Web3 Tea is a bi-weekly round-up of web3 developments, macro observations, and profound tweets.

Stay stimulated with web3 Tea, whether you're a crypto beginner or expert!